Our first stop on the trip was Talisker whisky distillery, so, as we were close by, we took the Mallaig-Armadale ferry to avoid a lengthy drive.

It was nice to skip 100 miles and get to the distillery early. Or so we thought. The place was packed, we could barely park and all the tours for the day were sold out. We settled for some bar tastings and some takeaway single malts. A bit of a shame. Not sure if you can pre-book, but if you fancy a distillery do some better research than we did, or take the ferry over to Raasay for their tours.

Down the road at Sligachan is The Cuillin, an vast mountain which seems to permanently be shrouded in cloud. There are some awesome hikes, a famous bridge, but also a brewery! It’s basically a large home brewing operation, but does top stuff. We tried a few ales at the bar next door then carried on to Portree. 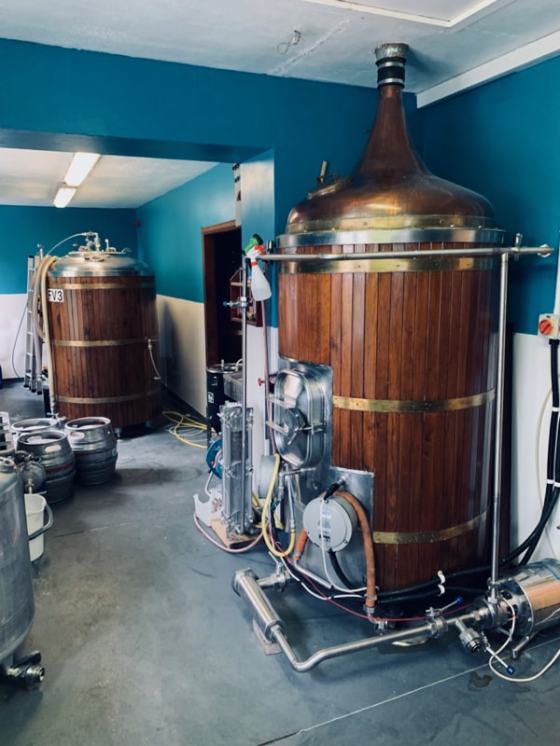 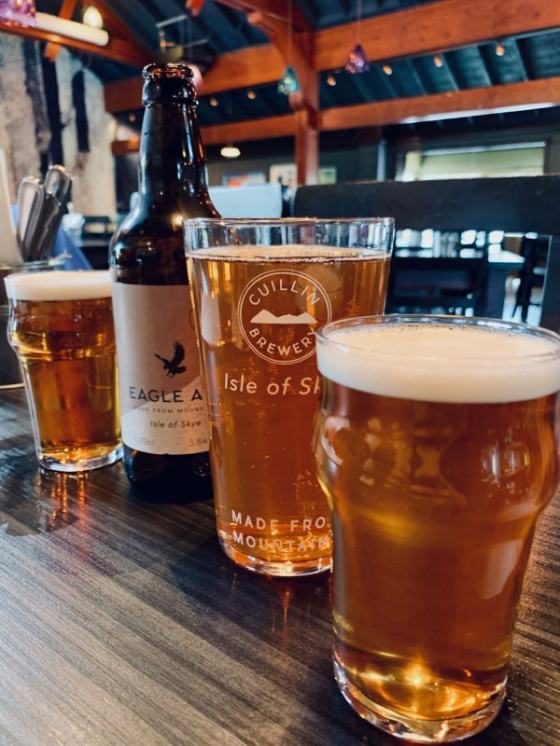 The capital of Skye, Portree is pretty small but has all you need – tack shops, sweet shops, fish & chips etc. in a touristy town. The harbour is nice but we weren’t overly impressed. Fortunately, we were staying northeast up the road at the Flodigarry Pods. 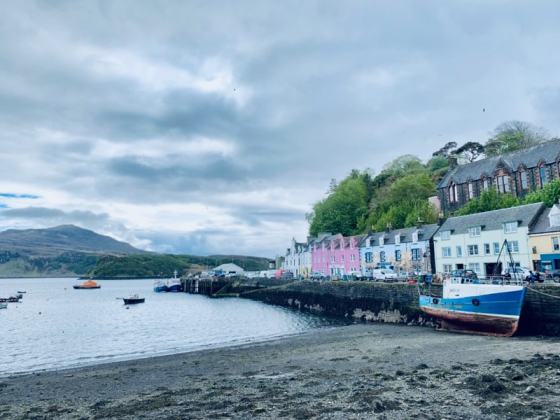 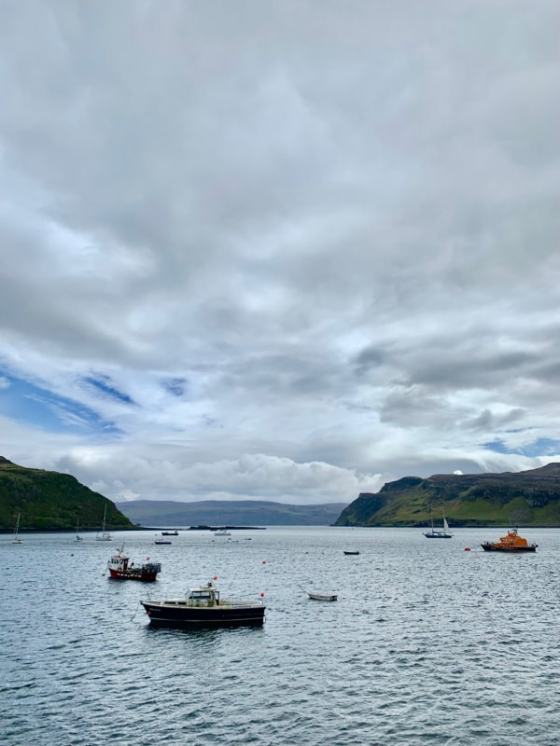 We’ve never done a glamping before, but these pods were in such a good location, and cheap, that we thought we’d give them a go. They were surprisingly spacious inside and had everything out needed. After a few nights we’re converted.

We weren’t aware but the pods were connected to a working sheep farm and each evening the farmer had C help out with feeding the sheep. She loved it! 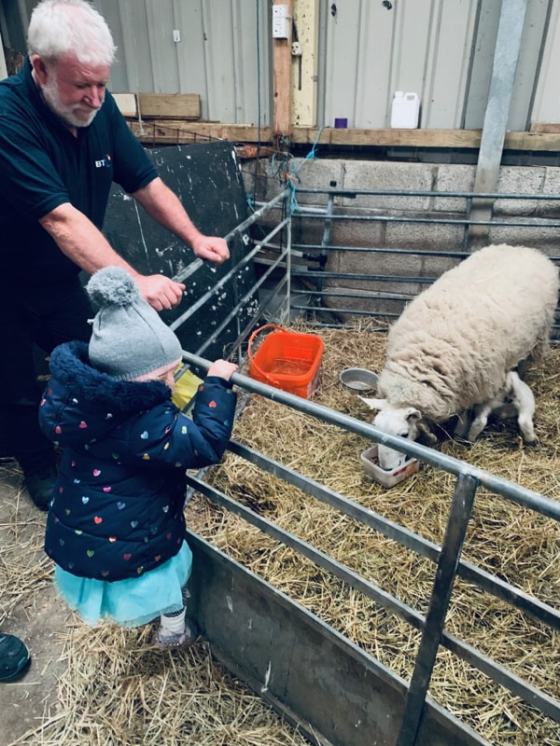 North of Portree has some amazing sights to see within a few miles and we worked out way through the list. First up was more Game of Thrones scenery at An Corran beach. 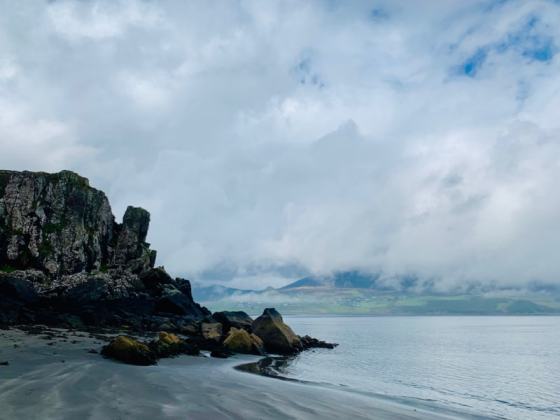 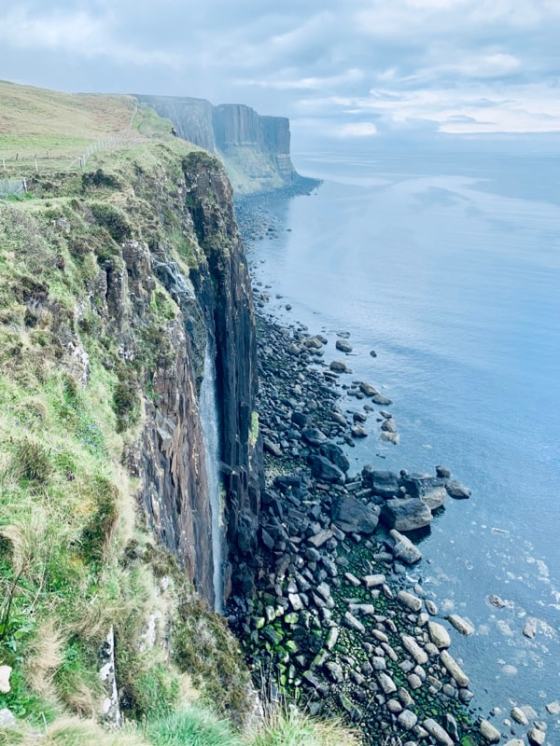 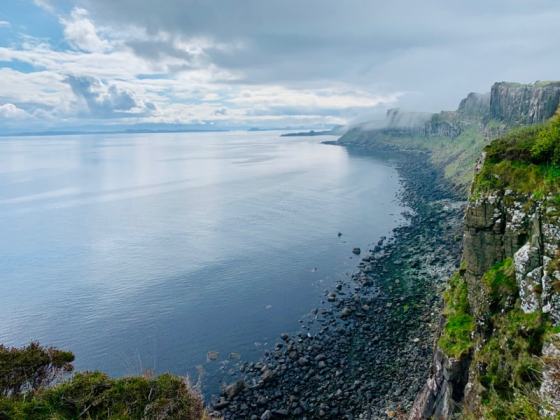 Then it was on to Lealt Gorge and waterfall. 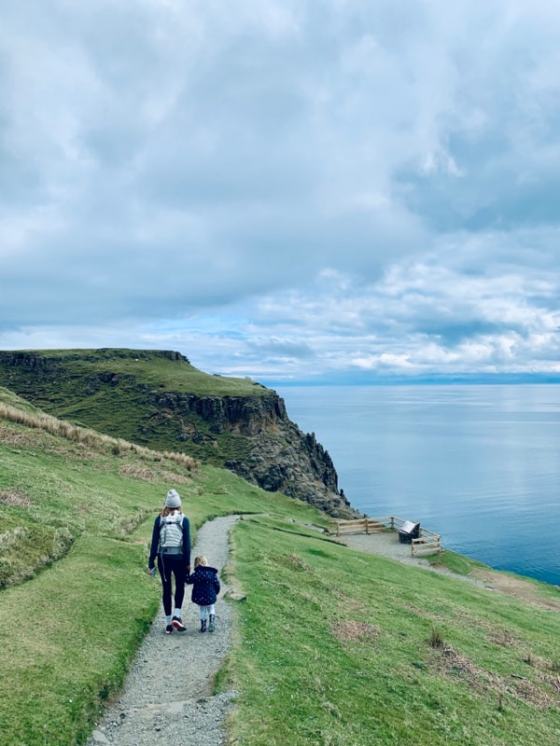 Our first big stop, and hike, was to the Old Man of Stor which has been used as a backdrop in a bunch of movies like Prometheus and MacBeth. You can spend hours hiking here, but with the little legs we only ventured about 1km to the first major viewpoint. 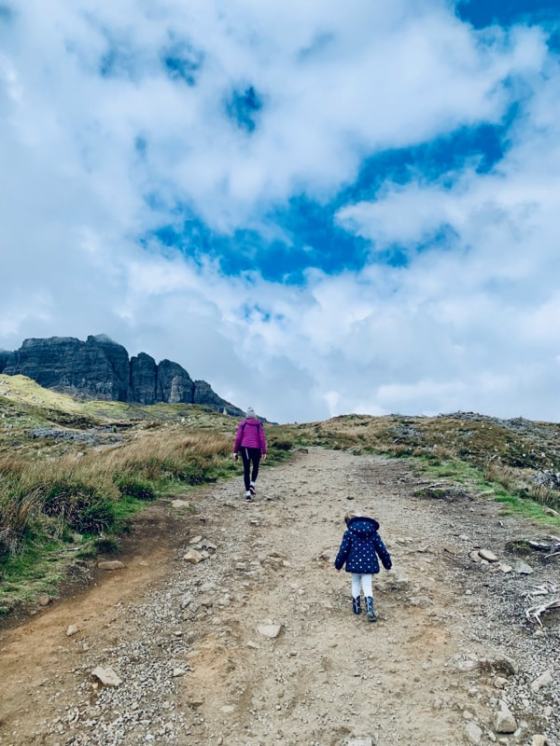 Some pretty nice views of the stack as well as out across the Sound of Raasay. 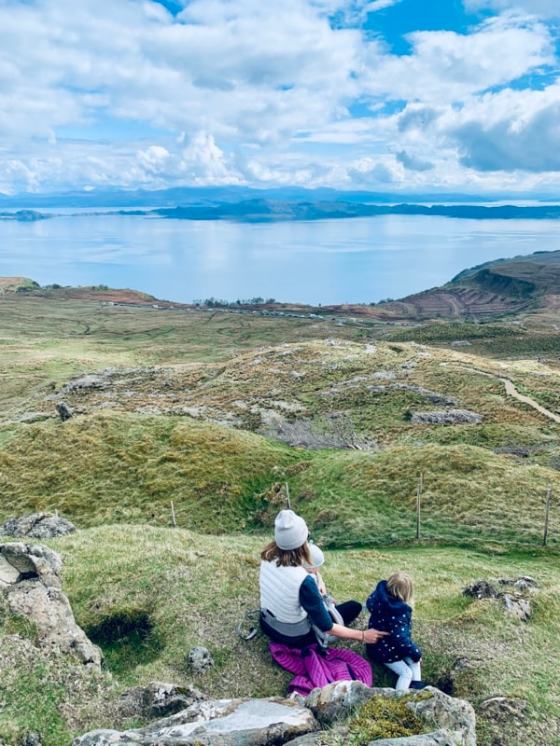 We then drove round the peninsula towards Uig which spotted some superb scenery and in the afternoon the sun makes the sea look wondrous. We pulled up at Duntulm for a wander along the coast. 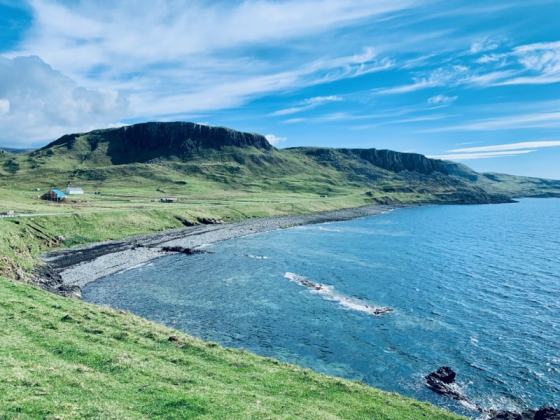 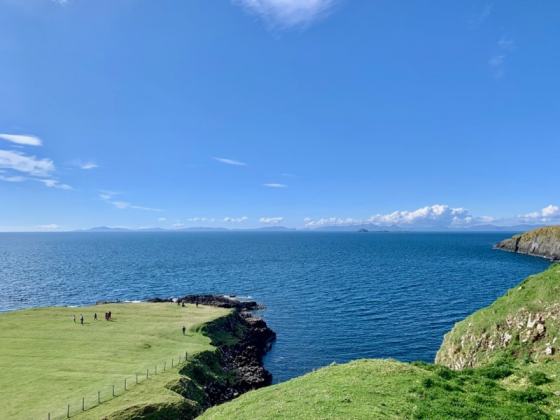 At Uig there’s another brewery, Skye Ales, which I preferred to The Cuillin ones, but there’s no way to taste their beers onsite unless you’re in a tour group. We bought a few to-go, but felt it was a bit of a missed opportunity.

The drive back from Uig to Flodigarry takes you via the Quiraing with probably the best scenery and views of the day. After navigating some traffic, the driving became stunning and I imagine the hiking would be too. If you carry up towards the rock pinnacles you reach a plateau and the late-in-day light that comes in through the rock gives it its nickname of The Cathedral. 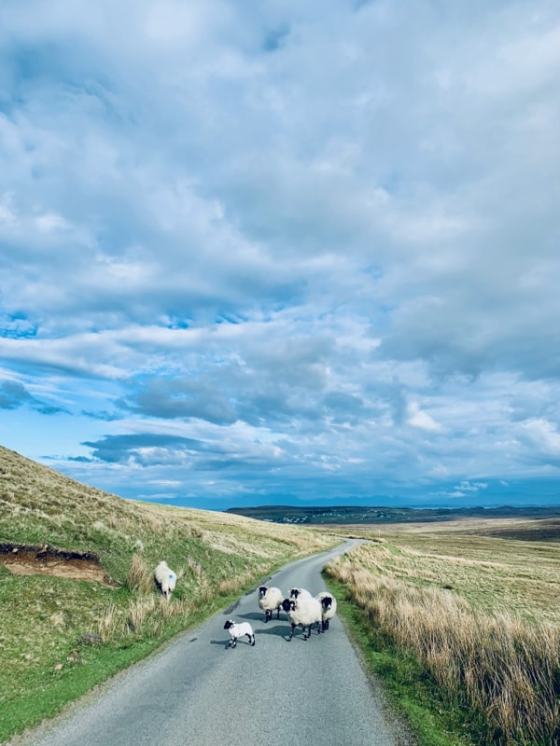 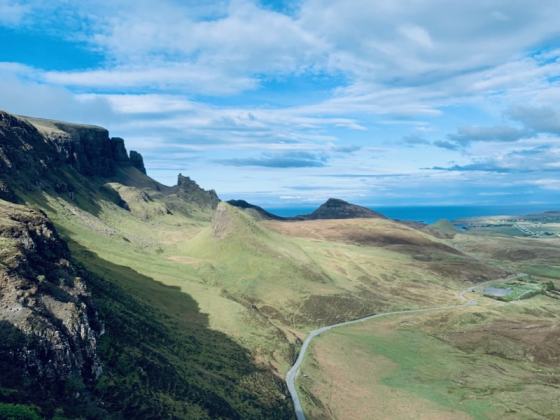 After a great few days in the pods we headed west towards Dunvegan, staying at a slightly nicer place – complete with bedrooms – overlooking a town called Stein that boasts the oldest inn in Skye. This was definitely off the beaten track and reminded me of Dingle in Ireland. It was great to stock on food/drink, cook in and relax in the evenings, again. 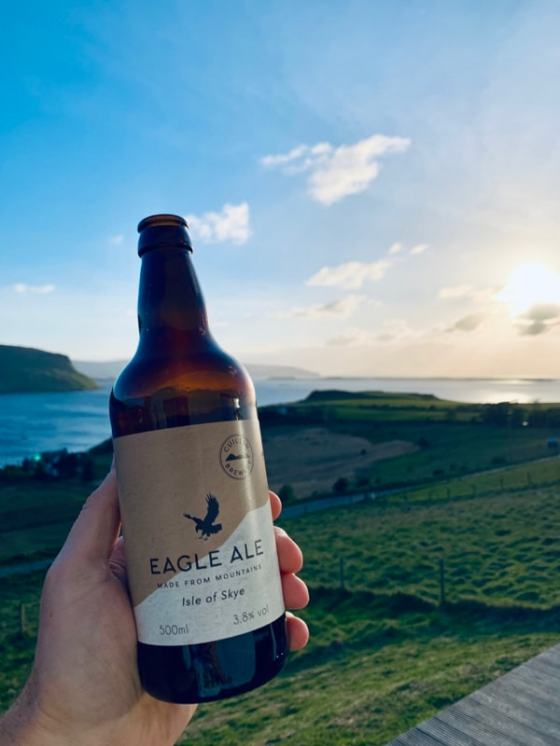 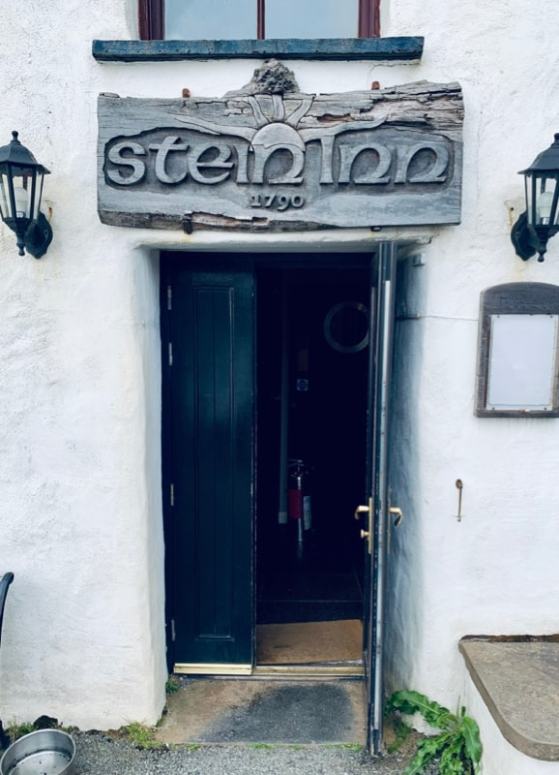 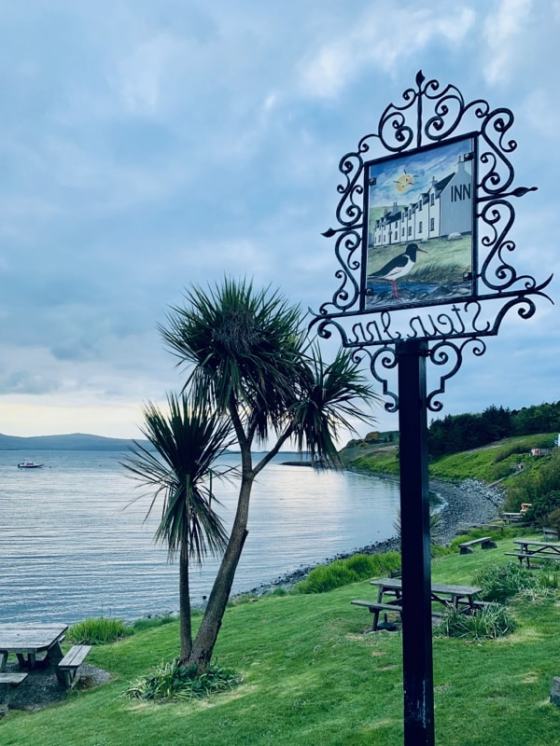 One of the main draws in northeast Skye is Dunvegan Castle. We paid a visit and also took in a seal tour (£14pp, £9 for the seals). It’s still inhabited today by the MacCleod clan, but to protect it from the elements, in early 20th century, they covered it in concrete. It looks a bit ugly up close, but hey, it’s still standing. 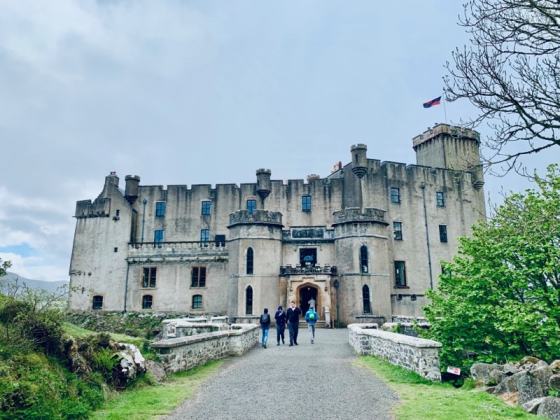 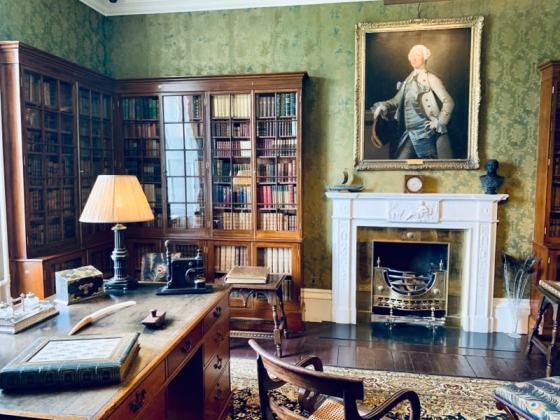 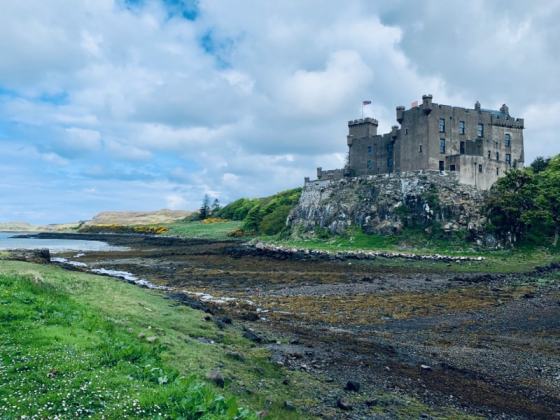 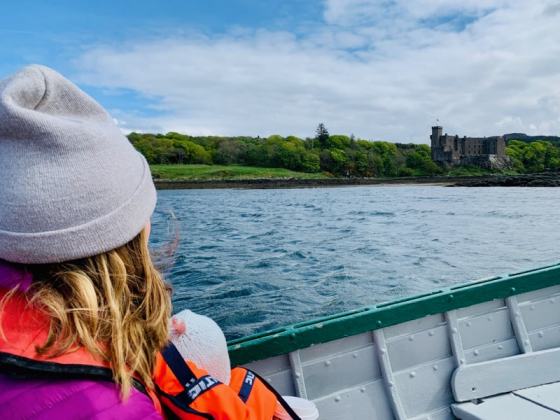 Not far up the road is Clairgan Coral beaches which in sunny weather. Unfortunately, we didn’t have sunny weather and the mile walk, late in the day, proved too much for the little ones legs. It looks worth the trip though. 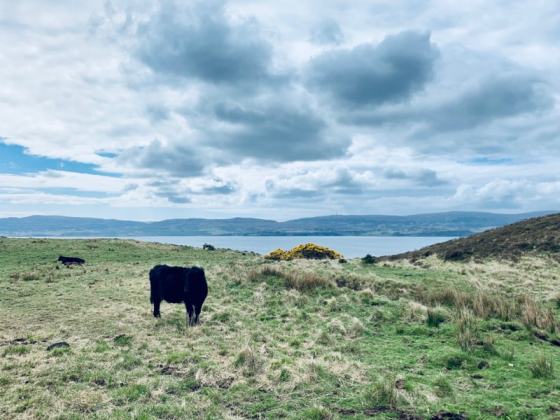 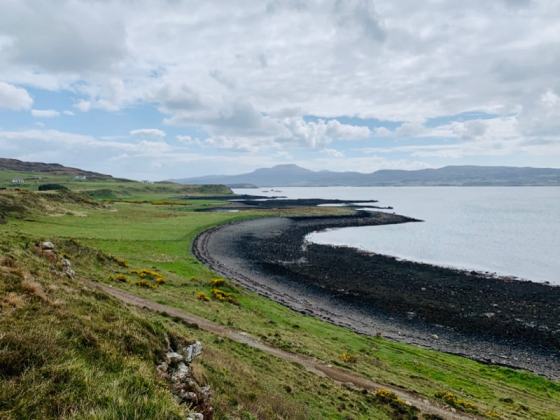 My favourite part of this leg was the walk to Neist Point lighthouse, that overlooks the Atlantic. On sunny days the views are spectacular, and the best ones are had to the right along the cliff edge. 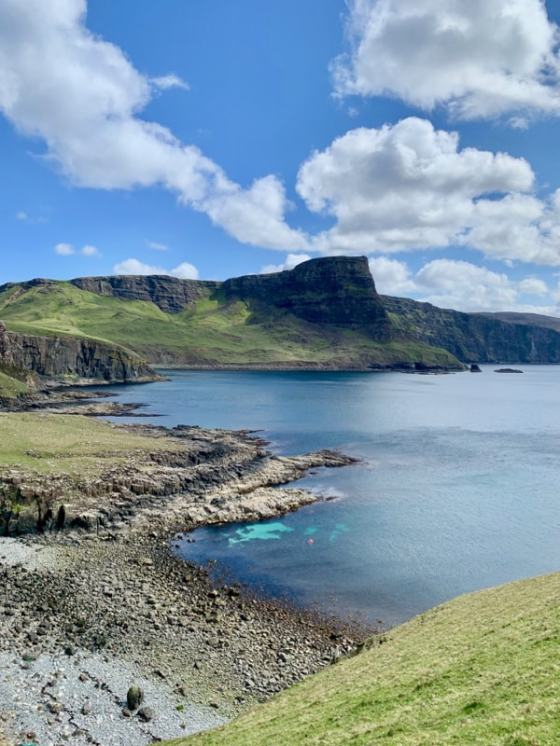 It’s a paved path all the way to the lighthouse, but I wouldn’t take a pushchair like some crazies did. It’s pretty steep in parts, but well worth it. All in we probably spent 1.5 hours there.

Next stop, the glens. Until then…