After Rome, the next thing on our things-we-really-wanted-to-do-in-Italy list was exploring the Tuscan region. Lots of people have a romantic notion of Tuscany – we were really excited to wander quaint medieval towns, drink lots of high quality vino and take in the country views – but where do you start?? There are the bigger towns of Florence, Siena and Chianti, smaller places like Montalcino, Montepuciano and Pienza and dozens of tiny villages. 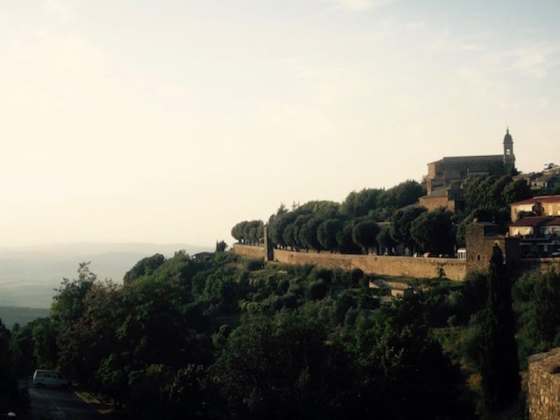 After much deliberation we focused on what we really cared about – the wine – and Montalcino won. Their famous Brunello wine is the champagne of the San Giovese grape having to meet certain criteria to be called a Brunello di Montalcino. It’s so good that the government guarantees it’s quality. We found a great hotel on the edge of town with views and a pool. 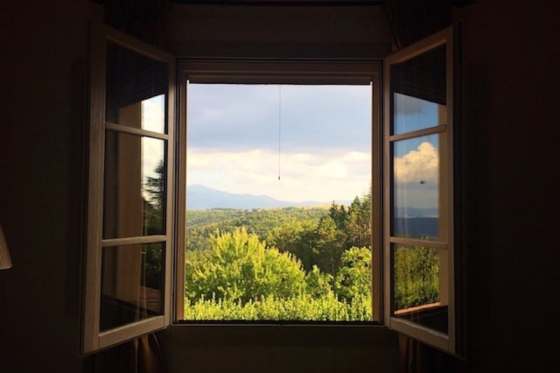 We spent our first evening wandering around town and taking in sunset from the castle walls. We bought a bottle on Rossi di Montalcino and drank it hobo-style in a park; relaxing after our long drive. 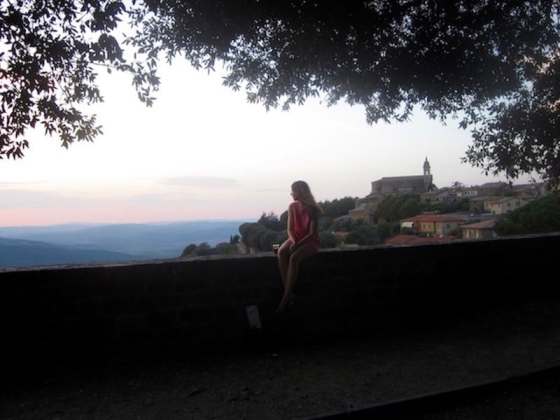 There is an organised bus, called the Brunello Bus (EUR 40pp) that has good reviews, that will take you around the vineyards, but it wasn’t running on the day we had allocated, so we took a DIY approach. Touring wineries here isn’t as organised as Napa-Sonoma and it’s mostly make an appointment, turn up and taste. First was a cellar, vineyard and tasting tour at the unpronounceable Ciacci Piccolomini d’Aragona (EUR 20pp for the tour & five wines).

This mid-sized winery had a good amount of info about the area, their history and the wine. It was run by a very enthusiastic girl and they have a pack of wolves onsite! Awesome wine and we bought a few to take home, one of which shouldn’t be touched for five years. 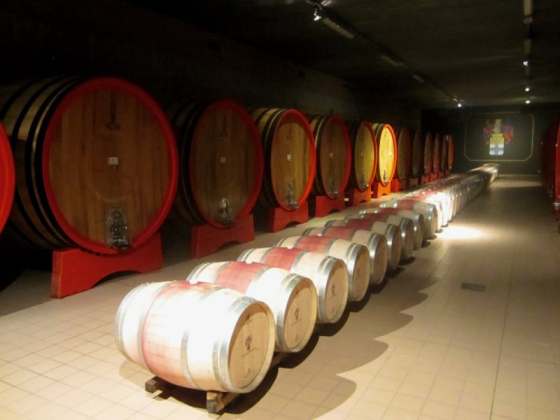 After that we stopped in at Fattoria di Barbi (they have a EUR 5 tour) and picked up another bottle. It’s a bigger vineyard with a smaller tasting room and again, top vino.

We spent the rest of the day cruising the countryside, getting a little lost along the way. We passed by Abbazia di Sant’Antimo, a gorgeous abbey, before stumbling across Castello di Velona and realising how the other half live.

We made it to Pienza for a late lunch at a tiny cafe that sold the lightest and best lasagne we’ve ever had. It was so good we ordered another and the waitress was so confused. Guess they’re not used to it there!

It’s a beautiful town, and I see why people base themselves here, but it was packed with tourists so was lacking a bit of that authentic feel.

That evening the incredible food continued where, back in Montalcino, I had my best ever dish in Italy – wild boar pici – at Les Barriques. And it was EUR 8. Wild boar has always been a favourite of mine, but the pici took it to a new level. Whilst looking like fat spaghetti, it was hollow, so all the juicy goodness gets inside! Unsurprisingly we bought a load of pici to take home too.

The next day we stopped in for some tastings at the massive Castello Banfi, which had a lot more of a commercial feel and I’m sure the buses stop here. EUR 15pp wasn’t cheap for just the tastings but it was a beautiful building and grounds.

Our last stop was at Máté: the smallest place we visited owned by a retired painter and writer who bought some land from Banfi. They inherited some vines, another neighbour lent them some staff and they’re now one of the best producers around. Not bad for a retirement project. The wine and the host were great and we bought a few to take home.

From here we drove to Siena, an ancient capital of Tuscany, made even more popular by the recent James Bond film Quantum of Solace. It’s famous for Il Palio, a biannual race where riders from ten rival contradas (districts) within Siena compete in a bare back horse race around the square.

The race dominates the town and only the winners of the race are allowed to fly their flag in the city. The winning horse is idolised and even joins the people celebrating inside the winners’ church. The square is so tight and jockeys regularly get tossed into the crowd on tight turns. 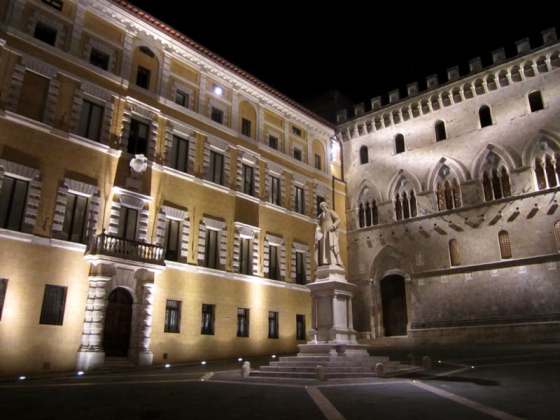 Siena is also home to the stunning Duomo di Siena (EUR 15pp) with its unique green and white striped marble pillars and ornate floors. Well worth a visit. A few times a year they remove the coverings on the floors and we were treated to some incredibly detailed scences. 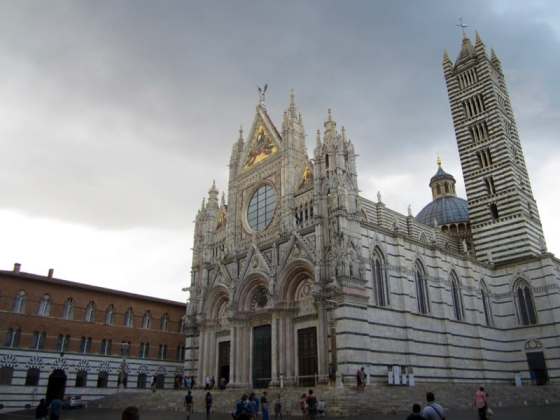 We had another great meal at Antica Osteria da Divo in the evening featuring more wild boar. It was a bit touristy, as Siena is on the whole, but the food was great and the wine cellar-esque feel added to the atmosphere.

I’m sure we missed loads of great bits of Tuscany, but we really enjoyed our three days in the region and we’ll definitely be back to tick off the parts we missed. Until then…